The one question we, as well as every photo/video related site, get is “What Camera Should I Buy?” I’ve spent a lot of time figuring out how to answer that question but maybe the best approach is to walk through how I decided to buy our new camera.

Now I knew that I needed to make the transition to 4K (yeah, I know I’m a little late to the game). Although I still plan on delivering 1080 for most projects for the foreseeable future, there are just a lot of advantages to 4K acquisition that cannot be denied.

About a year ago I decided to rent a Sony AR7 II. I had heard so much about these second generation Sony cameras and wanted to get a feel for the different brand as I was still shooting on my trusty Canon 5D Mk II. Well I figured out that if I rented the camera on Tuesday before Thanksgiving, I would only be charged for 2 days rental even though I wouldn’t have to return the camera till the following Monday (6 days).

One of the photos from my Sony AR7 mk II photoshoot

Although I mainly used it to shoot stills, this was my first foray into shooting 4K motion picture (outside of a GoPro or something like that). I liked the 4K imagery but frankly I just wasn’t too impressed with the way the camera felt in my hands. As a photo camera it was okay but for video I prefer a lot more tactile control on the camera itself – instead of having everything buried in a menu.

A few months past (and now we’re in March) and I got a call to shoot thank you video (a greenscreen documentary) honoring a patron of a regional playhouse. I had been doing a lot of greenscreen documentaries, renting a Blackmagic Pocket Camera as a second close up camera to my BMCC which captured the master shot. For this project, why not just rent a single camera that could shoot 4K and get my master and closeup just by reframing the shot in post?

I went to LensProToGo.com for my rental – I found that not only did they have the best selection of video cameras – they also had a great deal going on at the time. Now this is long before they became a sponsor of ours. Since I had always been partial to Sony, I started with the FS5 – and got for a very reasonable price and shipped directly to my office. 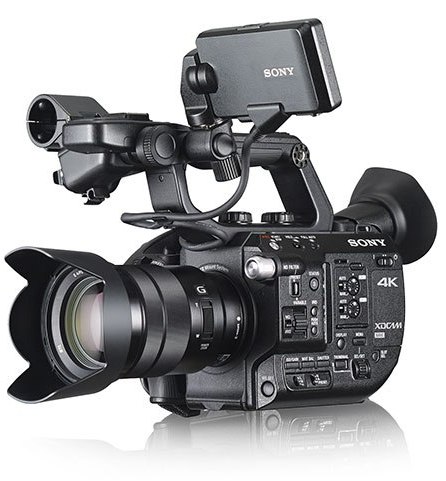 I completed the project with the FS5 and was really impressed by the beast. The FS5 when stripped completely down is incredibly tiny while still having a terrific feel to it. To me this kind of modular design is a pretty important thing. There are some rare times where I may want to deck out a camera and, but there are probably even more times when I just want everything really nice and compact. Another grand slam for the FS5 was it’s variable ND filter – you could actually adjust the strength of the ND filter smoothly up and down. That was some next level wizard stuff right there!

But… and he’s what I just didn’t like about the FS5… the 4K codec was brutal on my computer. It bogged down Premiere so much I really had to master in 1080 to get decent playback. It wasn’t that my computer was that outdated, it was just a very difficult codec to deal with.

A few more months pass (now we’re in July) and I get a call for another greenscreen documentary, this time on a research center for Alzheimer’s – time to try out another camera: the Blackmagic Ursa Mini Pro.

Again I order it from LensProToGo. It arrived, as all their cameras do, in a hard Pelican case and really well shipped. On the whole the Ursa Mini Pro is an impressive camera – Since I was shooting hours of footage I opted for shooting ProRes Proxy to conserve space (worked just fine for greenscreen as talking heads had very little movement), the files played perfectly fine on my computer. I also really like the ability to shoot all kinds of flavors of ProRes… even overshooting to 4.6K but I wasn’t really able to do much with that as I didn’t rent CFast cards to save on the rental.

But… the dang thing was a tank. LIke literally a tank. Where as the Sony FS5 felt nimble like a roadster, the Ursa Mini felt like driving a school bus.  It was just too heavy. I couldn’t imagine putting it on a gimbal or jib. Even the viewfinder was stiff – it took a bit of muscle just to pry it open.

Almost a week after we wrapped on the the Alzheimer shoot, I get another call to do a greenscreen piece for an Autism Center. The Canon C200 had just come out I ordered the last on that LensProToGo had in stock.

Like the Sony, the Canon C200 had a great tactile feel. It wasn’t as small and nimble as the FS5 but it was still a good modular design. I’m still a bit confused with how the viewfinder is suppose to close when in storage (actually I think you’re suppose to pop off the assembly).

Now I’ll be honest, when I first saw the footage on my laptop as I was transferring files off the card I was a bit underwhelmed. Something didn’t quite look right. It wasn’t bad, maybe something weird with the saturation… but something trivial enough that I thought could be fixed in post.

When I got the files on my main editing machine and started to key out the green, I shocked to find that the quality of the images was AMAZING. What jumped out immediate was the skin tone – after apply just a minimal amount of Red Giant Cosmo, the skin tone had a warmth and softness that just felt right. That C200 did something special – I don’t know exactly what, but everybody’s skin looked absolutely amazing.

The other two MAJOR bonus points for the C200 was the 4K MP4 format it recorded to was robust, played well with my computer, and wasn’t a total space hog (good for documentary work) and the you had the option for a

Unfortunately the Canon C200 was also the most expensive camera that I ended up testing. Months went by until I was just browsing the prices of these cameras and saw that Canon was offering a Financing deal that let me pay it off over 3 years. Well now it suddenly made financial sense for me and I pulled the trigger.

If you are looking to buy or upgrade your camera – you really need utilize a site like LensProToGo.com to do your homework and test the cameras you want to buy first (They became a sponsor after I had rented all these cameras and paid for them out of my own pocket – or at least out of my budgets for these greenscreen documentaries).

I think people can get overly obsessed with spec sheets and camera reviews. As someone that has done camera reviews I can tell you they have a bit of value in determining the “gotcha’s” of a particular camera system but the footage from them is mostly bunk. The shots you see in a camera review aren’t a testimony to the camera but rather to talents of the photographer themselves. I’ve also stayed far away from the toxic camera flame wars – especially in regards to Canon (so much hate…)

The most important thing to determining if a camera is a fit FOR YOU is to rent on and try it out on a PROJECT. Not just a series of tests that don’t reflect your workflow – but put it through the paces on an actual project. And don’t be afraid to take your time. I started this process of camera testing 8 months ago, it’s okay to take your time.

Now I know that the cameras might be cost prohibitive to many of my readers. But LensProToGo does rent a wide variety of camera bodies where you’ll find something that fits your budget. And if you’re doing industrials, you can always work these rentals into your projects.

And of course, they don’t just carry camera bodies, you can rent lenses, lighting, and all manner of accessories.

Ultimately using LensProToGo gives you flexibility and options. Need a second camera? Rent one. Got a big client and need the best camera money can buy… well don’t buy… rent one! (here’s a secret – big Hollywood movies don’t buy cameras – they rent them!)

When LensProToGo came onboard as a sponsor, I was ecstatic. I would have written this post with or without their sponsorship. Please take a look at their service as a thanks for supporting the kind of content we create here.

I came up in my career with the notion that I couldn’t rent gear because I wasn’t close enough to a rental facility to make it work. But with the freedom and flexibility that a service like LensProToGo offers, well anything really is possible.

You Talkin' to Me?