Home › Lobby › Editorial › How To Get a Proper Exposure When Shooting a Solar Eclipse (with Math!)

As the Solar Eclipse approaches, I figured this would be chance to flex some of the ideas I’ve been working on for a upcoming course on Exposure.

Instead of an Exposure triangle, I will be looking at exposure as a path where each step gives us some control over how the image is exposed. So let’s walk through this path in regards to a solar eclipse.

The light in am image starts from a source. When looking at reflected light – we are dealing with illuminance – but when measuring the light coming from a surface (or when shooting the surface of the sun) we’re dealing with luminance. The luminance of the sun’s surface is 1.6×10^9 cd/m2 at noon (basically the same as 16 billion candles in 1 meter square). We’ll use this value for the remainder of our calculation but before we get to that, let’s just quickly sketch out the rest of the path.

The next step in the light path is lens modification – in this I mean using either ND filters or Optical Compressors like the Speedbooster (yes, I know built in ND filters could go behind the lens, but order doesn’t really matter and for now, I’m putting the ND filter first). The next two steps are the aperture and shutter which make up what is specifically called “exposure” and used to calculate EV or Exposure value. Then the final step the Amplification – otherwise known as ISO.

The challenge now is to get 1.6 billion candelas per square meter down to something that won’t burn out our sensor. Let’s begin by figuring out how many candelas our sensor can handle – to do this I’m going to start picking some values. I want the lowest amount of amplification – so the lowest ISO I can get. My camera’s lowest setting is ISO 100. Going with a shutter speed around 1/500th a second and an aperture of f/16 we get an Exposure Value (EV) of 17 (using this calculator).

I don’t have one of those handy, so I made my own.

I took a 0.9 4×4 ND filter which is 3 stops and stacked three more 0.9 ND gels and one .3 ND (one stop) gel for a total of 13 stops. Using a light meter with a small flash light on the sensor, I registerd 22,000 lx – with the ND stack I registered on 2 lx – a factor of 1/11,000 which given the inaccuracy of my quick and dirty measurement is right in line with what I would expect (2^13 is 8196). I actually went further than the 12-13 stops I originally calculated but that’s fine as I have plenty of room to readjust the exposure (either shutter or aperture) during the actual event. Besides there are other factors that haven’t made into my calculation, like the sun may not be a full 1.6 billion lux during the eclipse and the fact that I probably don’t want the sun to be middle gray. In the end, it’s safer to to underexpose the sun than overexpose and I should have plenty of room to adjust.

And with that I’m ready to shoot the eclipse – I’ll update this some more graphics as I shoot them.

UPDATE – the day started ominously with an overcast sky. But listening to the news I heard the weatherman predict that the sun would break through the marine layer by the time of the event. Only after setting up my camera and studio computer to set a timelapse did the clouds start to part.

Using a 70-200mm zoom lens all the way zoomed in I was able to catch the beginning of the eclipse. My calculations were a bit off – instead of shooting 1/500th at f/16, I ended up settling for 1/1000th at f/16 – Ev18 one stop further than I can anticipated. At this rate there’s about 650,000 lux coming onto the sensor. I suspect my ND stack may not per performing as well as expected – it’s really only giving me 12 stops of protection (if I maintain the sun’s brightness value).

Here is an image of the beginning of the eclipse with colors enhanced. 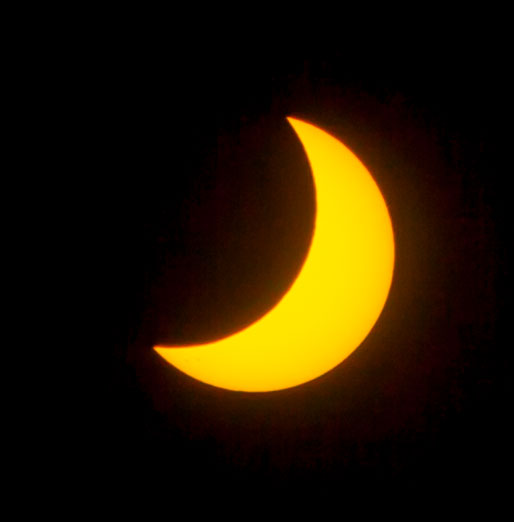